Christian Newman 34, and his husband Mark Edwards, 35, are embracing the joys of parenthood after their son Francis Newman-Edwards was born via IVF on June 6.

The doting fathers, from Auckland, began trying for their first child in 2016 – but it would take them more than three emotional years and tens of thousands of dollars to finally become the ultimate modern family.

Speaking to Daily Mail Australia, the proud parents – dubbed Baby Daddies – who have been together for 10 years spoke candidly about the arrival of their son following a whirlwind journey. 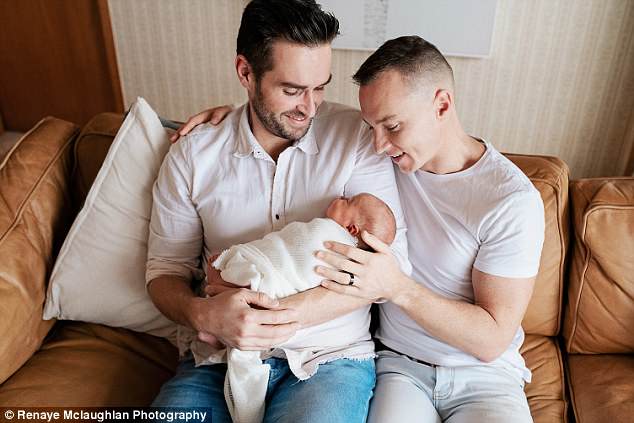 Christian Newman 34, (right) and his husband Mark Edwards, 35, (left) are embracing the joys of parenthood after their son Francis Newman-Edwards was born via IVF on June 6

‘We couldn’t believe it was actually happening. Mark wondered to himself “Is this real?” The reality when he was introduced to us was crazy.

‘I was speechless, which doesn’t happen often. I just kept giggling a super nervous laugh. Then I got a bit teary and choked up. It was a feeling I have never had before.

‘Our wee guy is so chilled and content, but we are just besotted by this tiny human. It is so cool. Something we have yearned for, for a very long time.’

More than five years ago, the idea to have a baby sprung into mind. 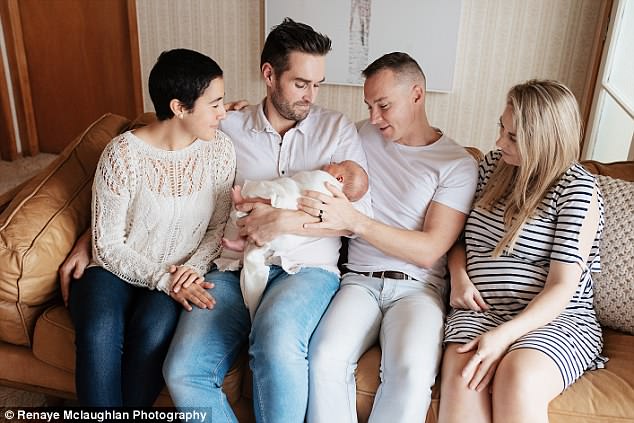 The ultimate modern family: Alisa Herrera Hayman (far left) made the gracious decision to donate her eggs after Aleisha Hart (far right) offered to be the surrogate mother

‘We are so totally in love and smitten with our wee man,’ Christian said.

‘Over five years ago we committed to having a baby. After years of thinking it’s not a possibility, and being told we couldn’t adopt or have our own child, we made it our life’s mission to make it happen,’ Christian said.

After countless hours of research and consultations, the pair realised that adoption was not an option.

‘No countries will allow same-sex adoption,’ he said.

And so they embarked on their search for a surrogate mother and an egg donor.

In 2016, the couple launched ‘Baby Daddies Looking for Kiwi Surrogate’ on social media to broaden their search for a surrogate who was willing to carry their baby.

‘After exhausting our friends and family with numerous requests, we decided to start the search via social media,’ Christian explained. 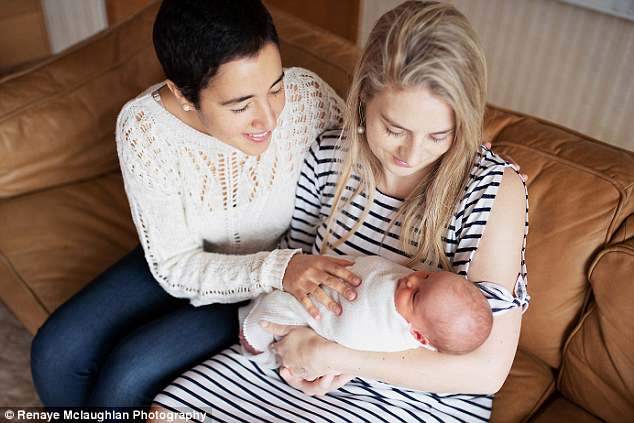 The fathers have welcomed their son after spending over $50,000 to fulfil their dream family

But the pair faced multiple challenges despite getting more than 30 potential candidates.

‘A lot of people got excited and a bit carried away with the hype, including us,’ Christian said.

‘However when push came to shove and things got real, everyone we had “interviewed” pulled out one by one.

‘It was devastating, as we were so excited and surprised we had so many people willing to carry our child.

‘We honestly thought we would not get one person, but we ended up getting more than 30 women contact us to offer their womb.

‘We went through a few rounds of applicants to find a suitable surrogate and eventually, we found “the one”.’

The couple found selfless paramedic Aleisha Hart, 32, from Nelson in New Zealand, who was willing to carry their child for the next nine months.

‘We first started chatting with Aleisha on July 15 2016 via Messenger. We were super excited about her message as she ticked every box,’ Christian said.

‘She already had kids, she was under 30, she lived in Auckland, she was a paramedic, super caring, generous and actively involved in groups and charity work.

‘She just seemed so perfect.’ 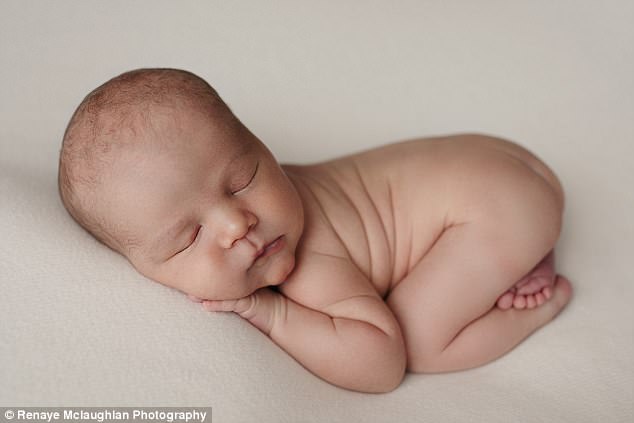 To find the egg donor, the couple wanted someone who was close to their family.

They approached their sister-in-law Alisa Herrera Hayman, 26, who eventually made the gracious decision to help the pair by donating her eggs.

Before they could start the process, they had to understand the adoption process by meeting with doctors, counsellors and lawyers to get all their paperwork signed off.

But the couple are allowed to pay for surrogacy-related expenses.

The pair estimated they have spent between $50,000 to $60,000 over the past three years on medical costs, IVF treatment, counselling, Ethics Committee approval, obstetrician and associated costs.

After one successful round of IVF, Aleisha fell pregnant.

‘We were very fortunate,’ Christian said.

Following a three year journey, they couple are now part of the happy family of three after their baby boy Francis was born earlier this month. 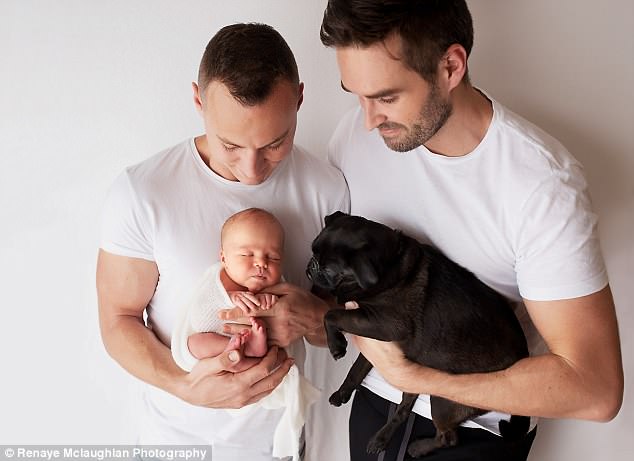 So what’s next for the family?

‘For now we will focus on bringing up Frankie the best we can,’ Christian said.

‘We are also focusing on Mark’s business Edwards & Co. Baby and looking to expand internationally, and renovating our house.

‘In the next few months we will look to start the whole process again, but we need to save some money to afford a wee brother or sister for Frankie.’

For any same-sex couples who are keen to become parents, Christian said: ‘If you are truly ready to give everything you have to someone else, and you are prepared to sacrifice a lot to make it happen, then go for it.

‘After 10 days in, we know this is everything we had ever hoped for. It is truly an amazing feeling.

‘And for those people who have been told ‘you can’t have kids or you shouldn’t have kids’, or fear of being ostracised for being gay, or worry their kids will be bullied for having gay parents – forget about it.

The intimate family portraits were taken by Renaye Mclaughlan Photography.